Some years ago (back in the early 1990's !) I bought a serial to digital input/output converter module to experiment with connecting things to my computer(s). This module was sold by Maplin, made by R.M.Electronics and was named the RM9011. As with many things I've tried in the past, I can't recall having much success using it with a range of computers I owned, these being the Dragon 32, Atari ST, finally migrating to the PC running Windows 95. So it was put away for a future project...

With the arrival of the Raspberry Pi my interest in interfacing with technology and sensors has been rekindled. So digging out the RM9011 I have spent a happy few hours figuring out how to interface this with the Raspberry Pi using some discreet logic circuitry and using a serial console (minicom) to configure and test different scenarios with sensors and LEDs.  Using Python I've also coded some scripts to run various monitoring and output scenarios. As this module is way out of date, considered legacy and I've not been able to find spares or originals I have decided not to use it for any serious projects. However, for completeness for this article I've included a description of the module, an image of the board together with the circuit diagram (courtesy of Maplin magazine - January 1992).

An image of the board and circuit diagram is below:

While searching on-line for information on serial to digital converters to take the place of the RM9011 I found this device - the DACIO300. 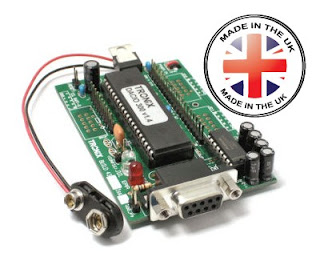 The DACIO300 by Tronisoft in many ways has some similarities to the RM9011, though much more advanced and more importantly still available to purchase. The way it is controlled is also similar to the RM9011, in that ASCII characters are sent to the interface board via RS232/Serial. This method of operating lends itself to being controlled directly from a serial console, such as minicom on the Raspberry Pi, or from the Raspberry Pi using Python serial commands or Arduino using serial print commands.

This board is fully populated but it is possible to buy this unpopulated and exclude many of the components from the board depending on how it might be used. It is also possible to buy just the pre-programmed chip to build your own project(s).

The DACIO 300 series modules are powerful, ultra low power consumption, microcontroller (MCU) based PC interfacing RS232 IO boards.
A single RS232 IO board provides two 8-bit digital input/output ports and up to 8 analogue input channels to computers equipped with a spare RS232 COM port or via a USB to serial converter such as item 2455 or 2327.
Each I/O is individually configurable.
The DACIO 300 features 8 10-bit A/D and a high speed 115.2kbps serial interface.
Easy to use communication and control open protocol.
Details about the RS-232 standard are available and provides useful information about remote operating distances.

This simple interface allows the Raspberry Pi serial transmit port operating at 3.3v to connect via one hex buffer of the HCF4050 IC and connect to the DACIO300 serial receive port operating at 5v. In the reverse direction, the 5v serial transmit from the DACIO300 is stepped down to 3.3v (though not absolutely necessary) via R1 & R2 to drive another hex buffer whose output connects to the Raspberry Pi serial receive port. The HCF4050 is powered at 3.3v with pin 1 +Vdd and pin 8 Ov or Vss. I have also used an Arduino clone (RasPi.TV Duino) in the same way to successfully interface with the DACIO300.

Here are a few simple examples of how the DACIO300 inputs and outputs could be used.
Port A comprises 8 bits, channels 0 - 7 and is by default an analogue input port.
Ports B and C are both 8 bits, channels 0 - 7 digital ports, Port B by default is set as inputs and Port C as outputs. Both Ports B and C are configurable at bit/channel level and can be either inputs or outputs.

The commands to interact with the DACIO300 are straightforward and comprise a string of ascii characters forming a command.

Each command has a start character either ! or #

Characters to issue a command; typically comprising the Port name, an operator (e.g. '=' to write, '?' to read), a character if needed to provide an input parameter and an end character ';'

If a valid command is received, the module returns a '!' followed by any data requested.

Examples:
!C=255;
This command is instructing the module that Port C has a decimal byte value of 255 written to it.

!B?;
This command reads the whole of Port B and returns a decimal byte value.

!Ax?;
This command reads Port A, bit x and returns a reply !xxxx<0D> where xxxx is 0000-1023
Further details are provided in the DACIO300 manual to translate the numeric reading to a voltage level.

Many other commands can be sent to the module to set Ports as inputs or outputs, to read ports at a bit or byte level, to write out data to the digital ports at bit or byte levels, and to read the analogue port values.

Full details and instructions are detailed in the DACIO300 manual which is a very clear useful guide.

I have experimented with this module running various scenarios of reading digital values at both bit and byte levels and setting digital values again both at bit and byte levels. Using a minicom terminal running at 9600 enables some simple experimentation to confirm the principles of what I've thought is possible. I've then followed this with using Python3 scripts to send and receive serial messages to configure, read and write date to and from the module. I can see this module has many practical uses where a simple and reliable serial connection is preferred over alternative I2C and SPI interfaces.

A Python3 script is listed below that queries the byte level values present on Port B and sets Port C outputs to match them. This script could be used so that Port B is monitoring various input lines and Port C writes out the 'state' of the input lines to light LEDs to provide a visual indication. A download of this script is available: DACIO300-auto-portb-byte-read-portc-byte-set.py

# DACIO300-auto-portb-byte-read-portc-byte-set.py
# Python3 script to run on RaspberryPi to continuously send serial messages to the DACIO 300
# only when GPIO port 17 is set high.
# RS232 interface board to query the logic levels on the digital Port B at 'byte' level
# and set Port C to the same value at byte level in order to mirror the values at Port B
# These levels can be used to drive LEDs, relays etc to reflect Port B status.
# Hardware interfacing with RPi:
# GPIO serial o/p connected to hex i/p of IC4050 running at 3.3v with
# hex output directly connected to TTL interface pin 4 (tx i/p) on the DACIO 300
# the DACIO300 TTL interface pin 5 (rx o/p) is connected to a potential divider
# to drop the TTL 5v to 3.3v, which is then connected to hex input on IC4050.
# the corresponding hex o/p at 3.3v is connected to RPi GPIO serial input.
# GPIO port 17 connected to a switch or set/reset latch circuit to control
# when the script sends/receives serial commands/data